An array is the simplest choice. The array should be sorted, because we are going to get its median. Even though it only costs O(lgn) time to find the position to be inserted with binary search algorithm, it costs O(n) time to insert a number into a sorted array, because O(n) numbers will be moved if there are n numbers in the array. It is very efficient to get the median, since it only takes O(1) time to access to a number in an array with an index.
A sorted list is another choice. It takes O(n) time to find the appropriate position to insert a new number. Additionally, the time to get the median can be optimized to O(1) if we define two pointers which points to the central one or two elements.

A better choice available is a binary search tree, because it only costs O(lgn) on average to insert a new node. However, the time complexity is O(n) for the worst cases, when numbers are inserted in sorted (increasingly or decreasingly) order. To get the median number from a binary search tree, auxiliary data to record the number of nodes of its sub-tree is necessary for each node. It also requires O(lgn) time to get the median node on overage, but O(n) time for the worst cases.

We may utilize a balanced binary search tree, AVL, to avoid the worst cases. Usually the balance factor of a node in AVL trees is the height difference between its right sub-tree and left sub-tree. We may modify a little bit here: Define the balance factor as the difference of number of nodes between its right sub-tree and left sub-tree. It costs O(lgn) time to insert a new node into an AVL, and O(1) time to get the median for all cases.

An AVL is efficient, but it is not implemented unfortunately in libraries of the most common programming languages. It is also very difficult for candidates to implement the left/right rotation of AVL trees in dozens of minutes during interview. Let us looks for better solutions.

The situation is similar when the count of existing numbers is odd and the new number to be inserted is greater than some numbers in the min heap. Please analyze the insertion process carefully by yourself.

The following is sample code in C++. Even though there are no types for heaps in STL, we can build heaps with vectors utilizing function push_heap and pop_heap. Comparing functor less and greater are employed for max heaps and min heaps correspondingly.

In the code above, function Insert is used to insert a new number deserialized from a stream, and GetMedian is used to get the median of the existing numbers dynamically.

The discussion about this problem is included in my book <Coding Interviews: Questions, Analysis & Solutions>, with some revisions. You may find the details of this book on Amazon.com, or Apress.
The author Harry He owns all the rights of this post. If you are going to use part of or the whole of this ariticle in your blog or webpages,  please add a reference to http://codercareer.blogspot.com/. If you are going to use it in your books, please contact him via zhedahht@gmail.com . Thanks.
Posted by Harry He at 12:01 PM 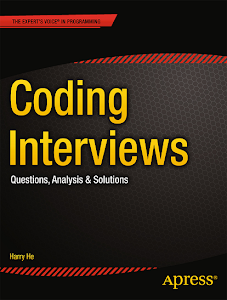